WEEKLY MARKETS REVIEW AS OF APRIL 13 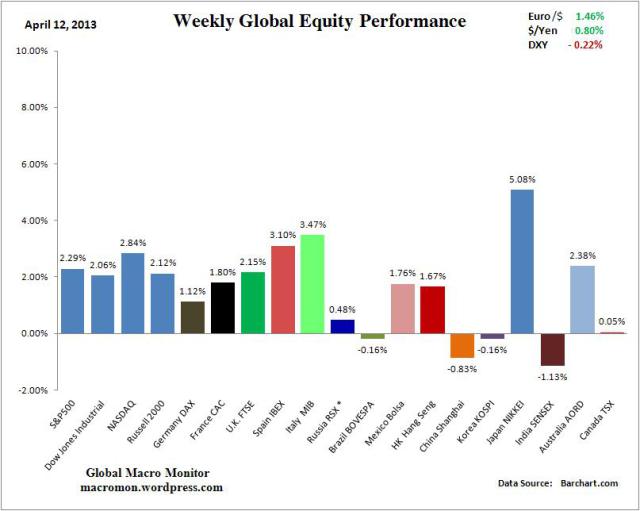 Last Thursday, the Bank of Japan (BoJ) launched an extremely aggressive monetary easing in an attempt to break the back of deflation and achieve its 2.0% inflation target in the next couple of years. The yen had been weakening in anticipation of further easing and has continued to weaken after the program’s launch, thereby bolstering Japan’s economic prospects. The BoJ’s new Governor Kuroda cheerfully greeted this depreciation as an overdue correction from an excessive rise that had sent JPY to its strongest on record. See details on our website We suspect other G-20 officials are not as upbeat about this dramatic move, clearly triggered by policy. We shall see whether policy tensions rise when the G-20 meets later this month.

We remain cautious on equity markets (ex Japan) in general, but this week, we should see some further gains on the better vibes…and let the fundamentals be damned! Don’t invest money you cannot afford to lose!

Equities: A reinforced risk-on trade has followed in the wake of BoJ easing. Equities soared this week led by the Nikkei. Further if the yen really starts to go into an uncontrolled tailspin – unlikely but possible – and it has probably depreciated far enough already to send the Nikkei through the 15,000 level.

Bonds: G7 government bonds were generally offered as safe haven demand eroded. Risk appetites boosted Italian bonds. Aussie bonds held up on a poor jobs report and perhaps Japanese demand. In the bond market, risk-on is the name of the game, and subtle differences between issuers are being ignored. Our bearish view on PdVSA is getting trashed – our bullish view on the Russian and Kazakh bank prefs, and especially, Argentina are being richly rewarded – all on essentially no news. A bit of brainless trading environment – go with the flow

Currencies: JPY continue to weaken. AUD was bid perhaps fueled by a reinforced Japan carry trade. The Euro is simply ignoring any bad news – at other times, the Portuguese situation would have caused a mini-panic – not now! The market simply shrugged it off. We cannot help thinking that this will end badly indeed…

Yen Weakening Continues In The Wake Of Aggressive BoJ Easing 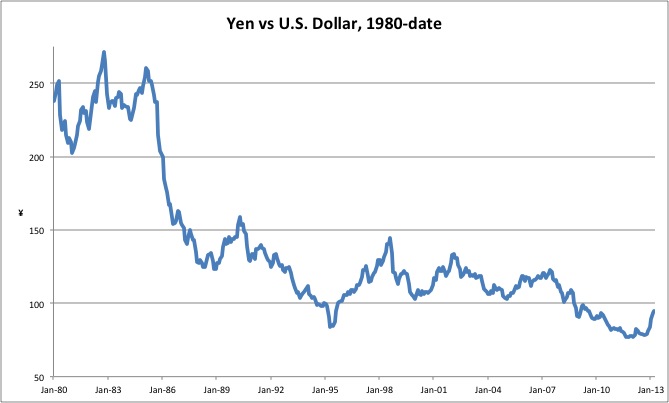 As the chart above shows, Abenomics has to turn around a decade and a half of steady appreciation of the currency from around 150 yen to the dollar at the start of 1998 to a high of 77 yen in the second half of 2011.

Higher inflation reduces real interest rates, something needed to get growth going again — or so runs the theory. When nominal rates are at or near zero, increasing inflationary expectations is the only way to bring down real interest rates. Expanding the monetary base aggressively enough is how to inculcate a belief prices will rise; hence the Bank of Japan’s aggressive QE— and Kuroda’s wiggle room to argue that the BoJ’s policy is not an attempt to manipulate the yen value; it is a necessary precursor, not an objective.

For a longer historical perspective the chart goes back to before the Plaza Accord of 1985, the agreement between the leading global economies — then the U.S., Japan, Germany, France and the U.K. — to devalue the U.S. dollar against the yen and the D-mark. That sent the the yen soaring. It doubled against the dollar between 1985 and 1987, and created the devastating endaka, or high yen recession in export-dependent Japan, followed by a property and stock bubble in the 1980s that burst equally devastatingly.

That is a lesson not lost on China’s leadership, which is one reason that Beijing has been so careful to let its own undervalued currency appreciate at a measured pace of its own controlling. Another lesson the Chinese noted was that while the Plaza Accord’s devaluation of the dollar cut the U.S.’s trade deficit with Europe, it did not have the same effect on the trade deficit with Japan. Europe was relatively open to foreign trade whereas Japan was not, making the later less responsive to monetary policy measures. Tokyo would face decades of pressure from Washington to ‘open its markets’ by making structural reforms that required tackling deeply entrenched domestic vested interests. Beijing had little taste for coming under such foreign pressure.