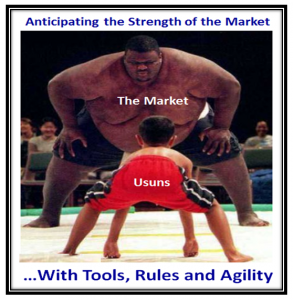 “He who mounts the tiger is afraid to dismount”.
Translation: Sometimes it is more dangerous to stop doing a dangerous thing than it is to continue doing it.

Altogether, there’s a 25- to 35 percentage-point performance difference between emerging markets and the rest of the world, depending on which indexes you compare. This is a startling reversal from 2009 and 2010, when emerging markets were considered a better bet than the developed world owing to their young populations, surging middle class, and low rate of sovereign debt.

Accordingly, you have to wonder — have the emerging markets become bargains too tempting to ignore? You’d certainly be “buying low.”

See Our REPORT  Emerging Markets – Where Do We Stand

One key to the answer lies in the reasons emerging markets have struggled. The economies of emerging markets such as Brazil, South Africa and Russia are heavily dependent on commodities, whose prices have been sliding. Shares of commodity producers moved down in tandem.  And if you look at the emerging markets all together, more than 20% of the MSCI Emerging Market Index is tied to commodity industries such as materials and energy. Little wonder that it has fared so poorly.

A second key is finance. The “taper scare” last spring, when the Federal Reserve proposed cutting back on its bond purchases, hurt emerging markets more than others. Emerging markets are regarded by many investors as risky assets, if not flat-out speculative investments, and thus are vulnerable to rising US interest rates. You saw that in the relative market drops after the Fed announcement: In May and June, the MSCI Emerging Market Index tumbled 17% while the Standard & Poor’s 500-stock index fell about 6%.

At the same time, the growth rate of several emerging economies, including China and Brazil, has slowed, stoking concern that the era of emerging markets is about to end.

There is little doubt that emerging markets currently offer bargain values compared to developed markets.  Look at the most common measure of a stock’s value, the price-earnings ratio (P/E): In mid-November, the MSCI Emerging Markets Index was trading at a P/E of 11.2 times 2013 projected earnings, a substantial discount to the 16.4 of the S&P 500 and 14.8 of the MSCI EAFE Index.  If you look at the consensus projections of 2014 earnings, emerging markets trade at a P/E of 10.3, versus 14.5 for the S&P 500 and 13.0 for MSCI EAFE. That, too, is a big discount.

But cheap doesn’t necessarily mean good. Among economists, there’s little disagreement that emerging economies should experience higher secular growth rates than developed economies. This makes the case for emerging markets more compelling.  Plus, emerging markets’ biggest markets are in Europe, where the economy is finally showing signs of recovery (though still fragile). A return to prosperity in Europe has the potential to be a strong catalyst for emerging markets.

So how should investors proceed?  Selectivity and active management are key.  Other than their high growth rates compared to the developed world, most emerging economies have little in common. Some are commodity-heavy (Brazil, South Africa and Russia), some are technology driven (South Korea, Taiwan and India), and some are integrated (China and Mexico).

Investors need to focus on investment themes and countries where they have high conviction about a positive future — whether that means a commodity-price rebound or resurgent growth in China. In addition, they need to be aware of the currency risks and political uncertainties that can affect these economies. Most investors will gain comfort from relying on the expertise of money managers that specialize in emerging markets, as there is still, often, inadequate information and few accessible investment tools for navigating this relatively inefficient and highly volatile market.

Frontier Markets : Bargains for the taking — if you buy selectively

How to ride EM Tiger

Let’s start with the “why”.  An emerging market is broadly defined as the market of an economy that is in the process of rapid growth and industrialization. The chart below shows that these markets historically have provided higher average returns than developed markets. 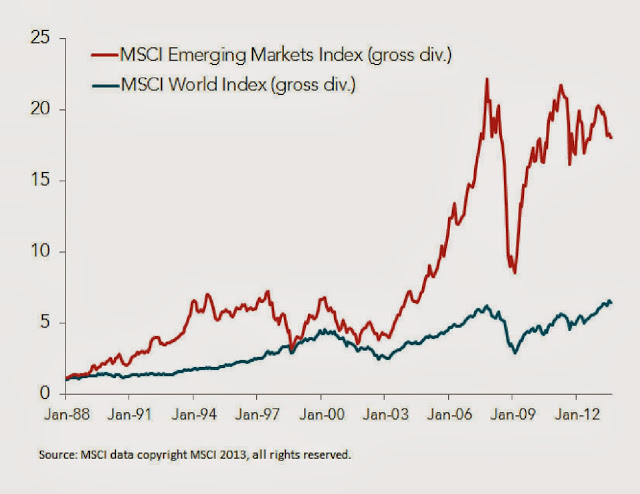 Past performance is no guarantee of future results. Indices are not available for direct investment; therefore, their performance does not reflect the expenses associated with the management of an actual portfolio.

The flipside is that emerging markets also tend to be more volatile because their systems of law, ownership, and regulation are still developing.  And emerging countries are often less politically stable.

In September 2013, the Organization of Economic Cooperation and Development (OECD) reported that while advanced economies were growing again, some emerging economies were slowing.  The OECD report commented  “One factor has been a rise in global bond yields—triggered in part by an expected scaling back of the US Federal Reserve’s quantitative easing—which has fueled market instability and capital outflows in a number of major emerging economies, such as India and Indonesia”.

Translation: Expectations that the US Federal Reserve would begin “tapering” back its monetary stimulus caused many investors to retreat from emerging markets.  Below are market returns for third quarter 2012. 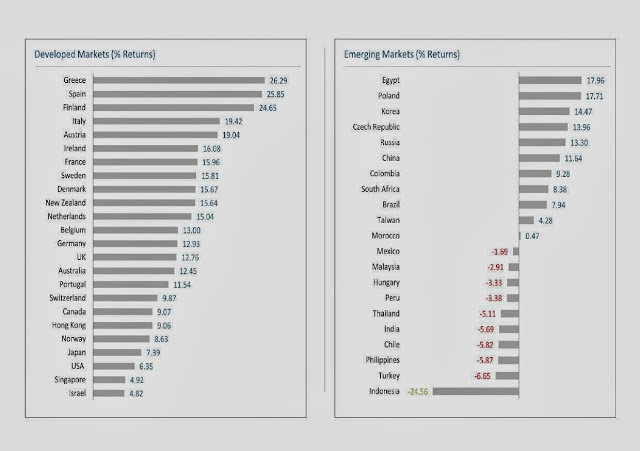 Past performance is not a guarantee of future results. Indices are not available for direct investment. Index performance does not reflect the expenses associated with the management of an actual portfolio. Country performance based on respective indices in the MSCI World ex US IMI Index (for developed markets), Russell 3000 Index (for US), and MSCI Emerging Markets IMI Index. All returns in USD and net of withholding tax on dividends. MSCI data copyright MSCI 2013, all rights reserved. Russell data © Russell Investment Group 1995–2013, all rights reserved. Greece has recently been reclassified as an emerging markets country by MSCI, effective November 2013.

Is jumping off the emerging market tiger now a good investment strategy?  Below are a few points to consider:

History has demonstrated jumping in and out of the stock and bond markets is counterproductive.  Dealing with volatility is part of the emerging markets experience. For those with a properly diversified asset allocation, appropriate for their needs and risk appetites, emerging markets are worth holding on.