Emerging Chronicles : Check In – Check Out

The Case for Emerging Markets’ Growth

Global economic growth hasn’t been terribly inspiring so far in the first half of the year, but many investors have nevertheless been inspired to pour more assets into the equity markets, some of which have surged to record highs. As we hit the mid-year point, now seems like a good time to take a pulse check of emerging markets and assess our prognosis.

Several emerging and frontier markets—including the Philippines, Indonesia, Thailand and Vietnam in Southeast Asia—have seen strong returns in recent months. And there are several other notable emerging market performers where positive local macroeconomic developments have attracted strong investment flows. Given that yields on some assets seen as “safe” are close to record lows, the attraction to potentially higher-yielding, but riskier assets such as emerging-market equities has continued to grow.

Of course, we’ve seen some disappointments too. Some larger emerging markets like South Africa, South Korea, Russia, China and Brazil have lost ground year-to-date through April. 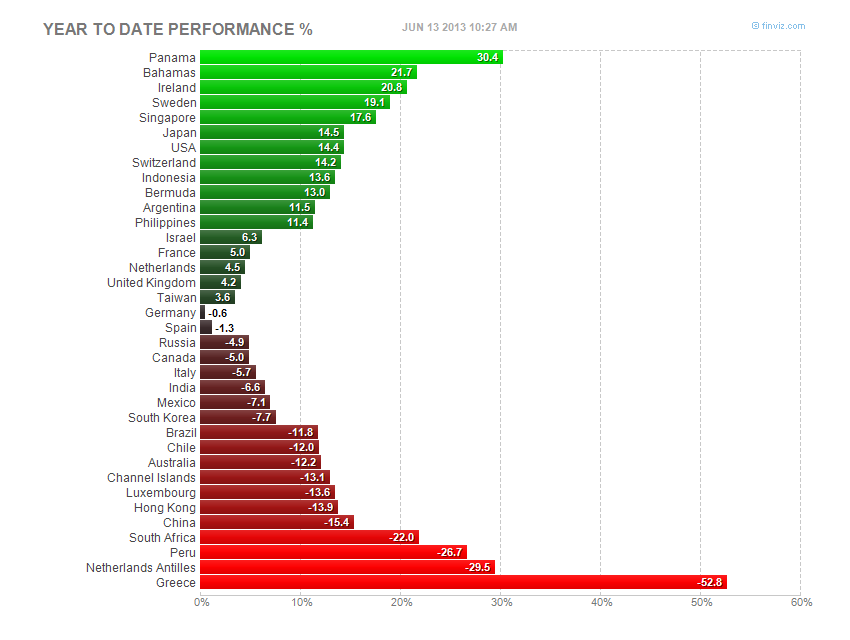 Reduced GDP growth forecasts certainly didn’t help and commodity-heavy markets took a double hit as reduced growth projections depressed commodity prices at the same time indications of rising production costs pressured individual mining and energy companies. In addition, sentiment in South Korea suffered amid threats from North Korea and fears Japan’s moves to depress the yen’s value would hurt South Korean exporters. In China, the authorities responded to rising property prices with measures to tighten monetary policy and restrict property purchases. In addition, some political and market developments in Brazil, India and Russia suggested that policy development was moving in a less shareholder-friendly direction.  For example, in Brazil, the government has initiated major tax claims against some large companies.

In our opinion, many of these issues that held back the performance of major emerging markets in recent months are likely to have little long-term impact.

The Case for Emerging Markets’ Growth

Despite a recent moderation in short-term global GDP growth forecasts, we still anticipate a likely reacceleration of growth in 2013 and in subsequent years, with 2012 expected to mark a low point. Moreover, we expect growth generally in emerging markets in 2013 and beyond longer term to be much stronger than in developed markets and believe such strong growth could not only drive rising demand for commodities, but also feed into corporate profitability and valuations over time. Industrialization and urbanization in emerging markets are likely to further increase commodity demand, which could push prices ahead over the long term.

In many emerging economies, commodities, exports and infrastructure development could continue to be leading growth drivers, but we believe going forward, overall growth is likely to arise increasingly from domestic sources. Expanding consumer wealth is creating an increasingly large and discriminating body of middle class consumers across emerging markets, and their demand is in turn creating increasingly significant domestic economic activity.

Even in markets like China, where demographics are less clearly favorable, productivity gains from moves out of agriculture and into manufacturing and service industries have still provided a positive influence on growth and domestic demand.

These so-called “emerging markets of the future” have enjoyed strong growth from low base effects, abundant natural and human resources, the availability of easy gains from market reforms and injections of technology into relatively low-wage economies. Compared with more mature emerging markets, frontier markets are relatively under-researched, and we believe that this lack of familiarity could lead to undervaluation and pricing anomalies that we could seek to exploit through our extensive research resources. We are finding many opportunities in frontier markets globally, but with an especially dense pack of opportunities, we think Africa in general represents an investment destination all its own and one we are eyeing with particular interest.

We remain aware of risks to all markets, including emerging markets, arising from the fragility of global growth, indebtedness, and a number of geopolitical risks, notably in Korea, the South China Sea and the Middle East. However, while we take account of macroeconomic considerations as part of our investment process, our central aim is to build portfolios from those stocks our research leads us to believe are most underpriced relative to their long-term potential.

My prognosis: Some markets do appear to have a weak pulse right now, but any number of catalysts could act as a jump start.

Whatever choice is made, Frontier Markets will continue making headlines in the coming years. We just hope that we are sufficiently well-positioned to take advantage of the numerous opportunities as they present themselves to us.

What has changed lately ?

Emerging-market investors who thought the sector would finally catch up with developed-world counterparts have been disappointing. Here’s a look at what could finally cause the worm to turn.

Woe unto the emerging-markets investor who thought the game would change in 2013. Instead of catching up with their booming developed-world counterparts, emerging-market shares continue to slide year-to-date, extending an underperformance that stretches back to mid-2010. 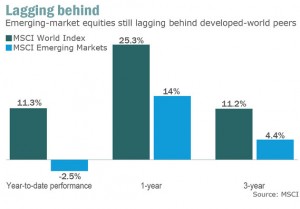 Some analysts say significant bargains are to be had as a result of that underperformance, while growing confidence in a U.S. recovery could help fuel some overdue portfolio rebalancing toward the emerging world. In fact, the long run of underperformance in emerging markets has left stocks trading at some of the biggest discounts to developed-market stocks in five years, even though emerging-market companies are more profitable and less burdened with debt than their developed-world counterparts.

Japan gets some of the blame for the retreat in emerging markets’ shares. Aggressive monetary and fiscal stimulus has sent the Japanese yen plunging, while the country’s benchmark Nikkei stock index has rallied nearly earlier this year. The slumping yen — down more than 15% versus the dollar year to date — is a boon to Japanese exporters, but it isn’t doing any favors to competing Asian companies outside Japan. Korea’s KOSPI Composite Index is down 1.2%.

That said, it’s not clear a weak yen is bad for everyone. It’s obviously bad news for Korean auto makers, for example, who are competing directly against Japanese companies. But it’s not necessarily an obstacle, say, for firms that are part of Japan’s supply chain.

Then there’s China: Emerging-market investors came into 2013 partly buoyed by expectations China’s growth was intact. But signs the economy is indeed slowing have helped push down commodity prices. China is just one part of the broader slump in commodity prices. But the drop in oil, metals and other commodities is making life rough for emerging-markets investors.

The MSCI is heavily weighted toward energy and materials, which has hurt its performance, notes Karin Anderson, who analyzes emerging-market funds for Morningstar in Chicago.

That’s spelled trouble for funds heavily weighted toward those sectors or countries, such as Brazil or Russia, which have commodity-dependent economies. The Dreyfus Emerging Fund , for example, is off more than 5% year to date. Two of its biggest holdings, according to Morningstar, are Brazil’s Petrobras and Russia’s Gazprom. Of course, funds that had been more focused on the so-called BRICs — Brazil, Russia, India and China — had a leg up when commodities were booming. But they may have been left behind as compared with funds more exposed to currently booming emerging stock markets such as Indonesia or Turkey.

And while value investing has traditionally worked well in emerging markets, the strategy has struggled since the financial crisis as investors fled risk. As a result, long-ignored, high-beta, economically sensitive stocks are trading at a significant discount, they said. Beta is a measure of how a security responds to price swings in the overall market. In a recent note, Nicholas Smithie, strategist at UBS, said he’s still concerned about the outlook for emerging-market equities for the rest of the year, but has pondered whether a broader move out of expensive, defensive sectors into global cyclical stocks could be repeated within emerging markets.

Technology shares are basically a “defensive cyclical,” he said, with much lower volatility than other cyclical sector. It’s also a rare part of the emerging-markets universe that has positive earnings momentum, and is also cash-rich and sports “reasonable valuations.”

How to invest in the emerging-markets wealth effect

The savviest investors in coming years will be globally focused and favor stocks over bonds — particularly the shares of game-changing business and technology innovators, and the beneficiaries of emerging-markets growth.

Generating superior portfolio returns in coming years hinges on buying stock in companies at the forefront of resurgent American innovation and those catering to the needs of increasingly affluent middle-class consumers in China and other emerging markets. By 2030, the middle class is expected to double, to 2 billion worldwide, with emerging markets leading the growth.

As for emerging markets, we encourages investing in agricultural commodities and in particular water-related industries, given that analysts expect increasing competition globally for water and food. The emerging world is consuming more meat, for example, and the analysts note that a kilogram of beef requires 10 times the water to produce as the same amount of grain.

The economic activity generated by emerging markets won’t be confined within their borders; consumers in China, Russia and elsewhere already are buying property, goods and services in North America and Europe, generating growth. Smart investors will look to see who benefits from growth, not just where it occurs.