See our updated report and technical analysis on our blog Gold Slam : The Unavoidable Consequence of the Currency War

We have speculated before (below) as to what the decline in gold may be telegraphing and what the worries underlying its decline may really consist of :

A word of caution: if a severely oversold market just keeps falling, then there  is sometimes a lot more short term downside in store. We’re not saying that this is likely to happen in gold’s case, we just want to point it out as a general rule of thumb. The higher probability is actually that extremes in sentiment and other ‘oversold’ readings result in a near term reversal, but one should be aware that there are occasionally exceptions.

A panic was/is underway in gold and silver. It is impossible to tell when it will be over, but it is astonishing that it has become so intense (it is actually a bit out of sync with the actual price movement in gold). The action in precious metals stocks is a reflection of the growing panic in the underlying metals  – they have so far led the decline, but are now severely oversold. At some point  an opportunity should present itself, even if it is just for a short term trade.

In reviewing your position in either silver or gold today, beware of panic selling. See how much money you’ve got at risk, and remind yourself why you got into precious metals in the first place. Has the long-term picture changed? We don’t believe the financial crisis is done yet. But right now, Wall Street and the gold price say otherwise.

See also “What smarter minds than mine think about gold” 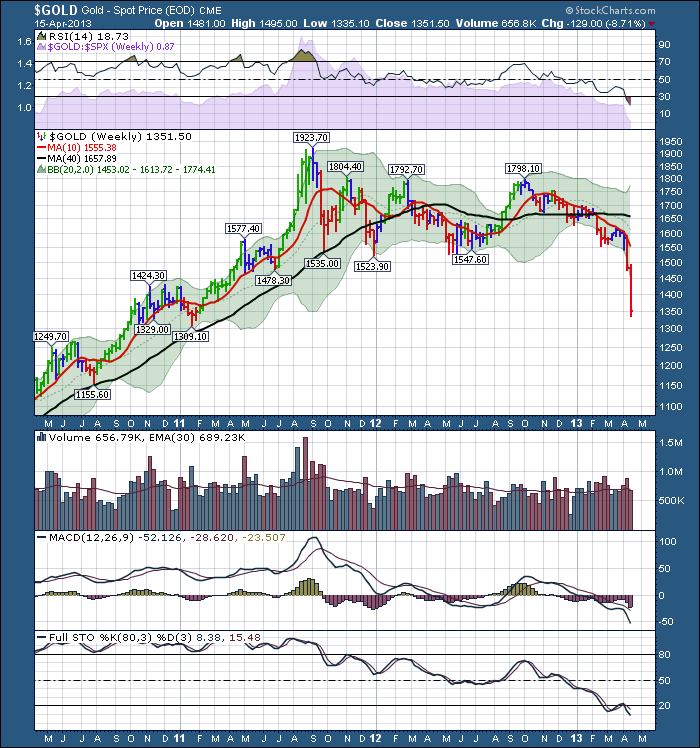 So far, 2013 isn’t proving much fun, despite fresh Eurozone crisis, plus ongoing attacks on the value of currency by central banks everywhere.  Money managers have clearly grown tired of the financial crisis, if not blasé. After a full decade of year-on-year gains, gold’s drop is a natural outcome, and by no means does this fall undermine gold’s safe haven appeal. It may well, however, be costing you money you’d really rather not lose.

What we need to look for is a swift recovery to above $1500 and an ongoing strong up-move in a truly impulsive manner. The fundamentals for holding gold are as strong as ever. Gold is an insurance against a range of financial disasters that we don’t need to go into now. You do not cancel your fire insurance when you can see fires burning all around you.

Certainly confidence in gold has been shaken and sentiment indicators are at record lows in some cases. This is exactly what one would expect at a major low in the market after a brutal 19 month correction. The conclusion is that factors are now in place which could support a major low in the gold price.

Regarding miners we we remain very prudent for the short term (see our sell signal last Feb ) Knowing that the average production cost is round 900$/oz- 1’000$/oz, below that level a real shortage would put pressure on the supply.

We must accept the fact that gold has entered a bear market. If you expect prices to snap back to $1,800, you’re going to be waiting for some (long) time. Also, you’ll hear a lot about how gold is “oversold” after this huge drop. But it’s too early for this type of analysis. Unfortunately, we endured the 1980 gold peak and we learned that merely being “oversold” will not lead to a massive rally that magically pulls gold out of its slide. In fact, most bear markets begin with scale-tipping oversold readings. In the short-term, gold could tread water between $1,350 – $1,450. A medium-term price support and target is between $1,250 – $1,300. This is where the metal consolidated immediately before and after the 2008 financial crisis before its 3-year push toward $2,000. Book it… 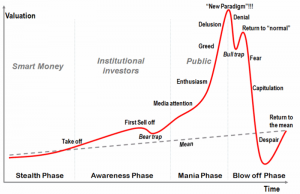 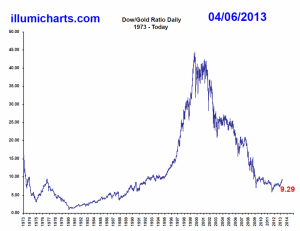 Typically the accelerating phase of  bull market is followed by a sharp drop. It is not at all a coincidence that the DJIA / Gold ratio mirrors this curve.  The idea is that stocks might do  better than gold for some time.

Since Gold pays no interest, there is no reason for Gold to appreciate in a positive rate environment. The reason for the current Gold bull run is probably because of negative rates in China. The reason Gold prices have started coming down is because the china bubble has burst, turning interest rates positive.

Naturally, should authorities allow many more banks to go under and take their deposits with them into oblivion, then the supply of the underlying currencies will begin to shrink.

This would be genuine deflation and it would be normal for these currencies to gain in value against gold (deflation is not possible in gold). However, we also believe that these and other worries in the context of potential central bank gold sales in the euro area are quite overblown. It should be clear that not a single central bank in the Western world will in the last resort allow deflation to truly take hold. They would probably rather ‘go Weimar’ on us than allowing that to happen.

This will end badly. The one advantage we have is that history is very clear on how these periods of economic malfeasance end. Let’s exploit that as best we’re able.