With the cryptocurrency world’s luminaries having joined globetrotting elites at Davos — and punters swept up in the market crash suffering sleepless nights — it’s time for regulators to reflect on the real-world impact of the next boom-and-bust crypto cycle.

Fintech and crypto apps have already expanded rapidly into digital cash, loans and complex products that can seem as simple as a credit card in e-mail form. That has created financial channels far beyond a one-way wager on Bitcoin or Bored Apes: Decentralized-finance (DeFi) platforms offer crypto yields of 8%-10% to investors; some then in turn fund startups around the world without touching banks. Tulipmania meets the real economy at WhatsApp speed.

In these times of market stress, rewards revealing themselves to be unsustainable have given way to a messy cascade of losses — highlighting the immense challenge facing policy makers, some of whom concede they’ve dropped the ball on crypto.

Crypto funds are currently being yanked from lending platforms, even those backed by real-world assets. One project offering 8% yields on tokenized debt issued by French payday lender Bling has been hit with “massive” redemptions in excess of its available cash and a credit line from venture-capital backers. For one investor I spoke to, that means potentially waiting months to get his money back. His main motivation for investing in the first place was free token rewards that have since evaporated.

Meanwhile, at the other end of the chain, lending  for the end-consumer has also hit a brick wall. Bling suspended its cash-advance service in April, as regulators cracked down on the sector. One consumer-advocacy group estimated the cost of Bling’s instant one-month advance as equivalent to a 128% annualized interest rate when including fees.

A small collateral-backed project like this rushing to sell assets is obviously nothing on the scale of the $60 billion Terra collapse, which has seen desperate Koreans beat a path to founder Do Kwon’s door. But it does show why regulators are nervous about future risks to the financial system.

Those free rewards and high returns are reeling in people who might be least able to afford it. European Central Bank data shows crypto ownership is a U-shaped affair, with top and bottom-income households more likely to own crypto than those in the middle.

Links with the financial system are growing as venture funds and banks seek to capitalize on crypto’s disruptive potential — Societe Generale SA has been tinkering with DeFi loans while others are launching stablecoins. “There is a very broad sense within the investor community that one has to dip one’s toes,” says economist Eswar Prasad, author of “The Future of Money.” 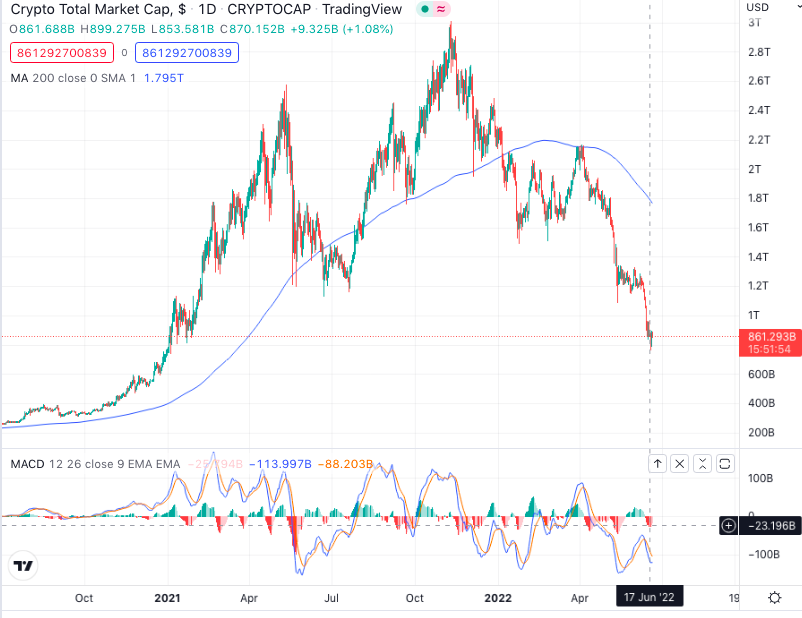 Crypto markets today are modest in size — the current total value locked in DeFi is around $100 billion, or about one-sixth of total venture-capital investing last year — but what might a dozen crypto lending blowups look like in the future if the sector keeps growing?

A race to sell assets to meet crypto redemptions could have huge spillover effects, especially if managed algorithmically via smart contracts. Parallels with the subprime mortgage market that triggered a global financial meltdown in 2008 are being drawn more frequently.
“Although the risks are currently small, they could rise significantly if platforms started to offer services to the real economy, instead of remaining confined to the crypto universe,” the ECB said last week, noting that crypto credit on DeFi platforms grew by a factor of 14 in 2021.

The founders and financiers behind DeFi platforms such as Centrifuge or Goldfinch say that serving real-world businesses is still a good-news story for crypto. Algorithmically managing projects and cutting paper-shuffling means unlocking efficiency gains and access to capital, they argue, and builds useful infrastructure in the way past market bubbles built railroads and the internet.

Perhaps. But these are also bank-like activities that could do with more bank-like oversight. They often involve complex financial structures stringing together several Delaware-based LLCs with little legal recourse and high counterparty risk. And they’re part of a broader explsoive  proliferation of fintech lending that has yet to be properly tested in a downturn. Rather than a high-speed train, this can look more like “shadow banking squared,” says fintech investor Peter Lugli.

Expect some of this activity to be dragged more into the light as a result of institutional and regulatory focus: Maybe the next step is that the likes of Bling will behave more like regular banks and DeFi lending platforms will feature more centralized big-name funds doing due diligence. But given the way animal spirits have a tendency to return, regulators will know managing the risks will only get harder from here. 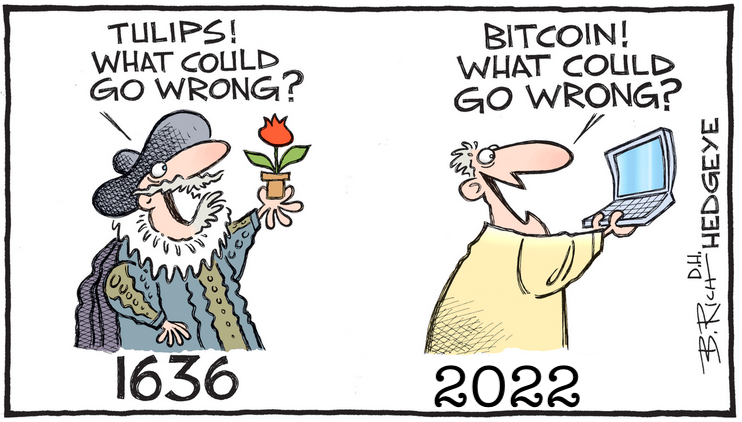 Bitcoin has had bubbles burst on a number of different occasions in its past.

This time is no different because once again the price had reached a level where no one else is looking to buy into the market and as a result, the sellers started to  take their profits. In order to remain bullish, we need more buyers buying more and more of the asset but eventually those buyers dried up.

Below is an analysis of what has happened in the past when something like this happened to BTC. It’s important to remember that BTC isn’t alone in having a history of bubbles as we have seen this in the property market, in the stock market during the .com bubble, and in the commodity, market Oil is always undergoing periods of bubble-like activity.

A bubble is a normal and relatively conventional market movement in the economy. A bubble is a way of ensuring that assets don’t become overbought and over-inflated.

Profiting from a bubble

There is a huge opportunity to profit from a bubble both on the upside and the downside. If you know what you are doing you can go long on BTC and ride the trend upwards and sell when it reaches the top. On the flipside shorting bitcoin is easier than ever with the amount of crypto margin trading and CFD exchanges in the marketplace today. If you use your technical indicators and understand at what stage the bubble burst is a good time to switch from a long position to a short position you can really make substantial gains from both the rise and fall of BTC in a bubble situation.

The first thing to understand is the structure of a bubble so you make sure not to get over-excited when the “bull trap” happens or to not get out of your trade when the “return to normal” phase occurs.

A simple moving average indicator can be a great friend in these times as it can help you time your long and short positions into and out of the market. 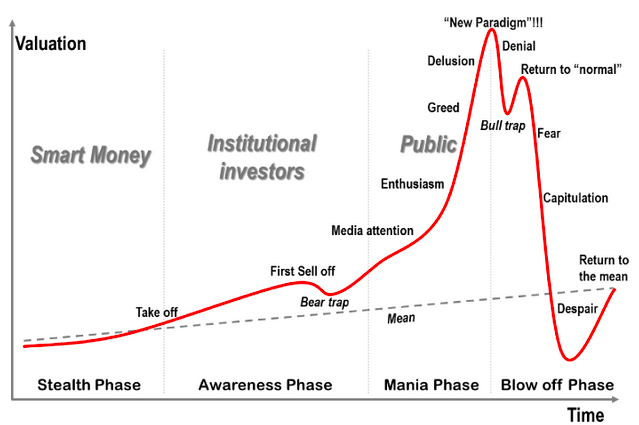 Since its inception in 2010 BTC has constantly been moving in and out of bubbles. In this section, we look at some of the historical bubbles that the BTC market has undergone.

In February 2011 Bitcoin had its first bubble burst when it reached dollar parity for the first time in its history. The bull run began as early as July 2010 when BTC was only worth a few cents per coin.

This bull run was associated with the underlying technology and as a result, the technology advances drove the price higher and higher.

The first truly astonishing BTC bubble occurred in June 2011 as the result of an article about the Silk Road on Gawker. The article spoke about how illegal drugs could be purchased with the cryptocurrency on the dark web website.

At the time there was also a significant surge in the number of cryptocurrency exchanges that opened and as a result buying, BTC became more accessible to the public.
The combination of these two factors sent BTC from $1 to $30 in just a few months.
Like any bubble, it eventually burst as it couldn’t sustain the growth at the time.

In a very short period of time, BTC went from dollar parity to be worth over $1,000. This was an important psychological threshold that was broken in November 2013. It does seem the BTC bubbles from this point onwards tended to be at the end of a year.

Like any of the bubbles in its history, the 2013 bubble resulted in a massive crash that didn’t recover for a number of years. That’s another important thing to consider, the amount of time it takes for BTC to recover after a bubble bursts can be 3 years.

2017 saw the largest bubble in BTC history with everyone and their grandmothers buying into this bubble. The mass media-fueled huge overbought frenzies when there was basically no one else to sell to.

The reason for this bubble was probably down to the wide range of Initial Coin Offerings (ICO) that were making huge promises.