Bonds warning: Raise interest rates or we’ll do it for you

Jerome Powell played with fire, and the US economy is about to get burned. The bond market will be the incinerator.

The bond market doesn’t get the attention it deserves. People are myopically focused on the Dow, the S&P, the Nasdaq because average investors don’t indulge in bonds the way they do stocks.
But bond markets are uncanny in predicting economic troubles ahead.

Now bonds are sniffing out more BS in the Fed’s policy of incremental interest rate hikes in an effort to quell rising inflation. Bonds are saying it’s not enough; we’re going need much higher rates and possibly a recession if we want to get inflation back to a more manageable level. 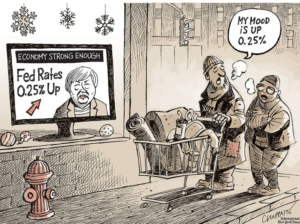 When we last checked in on rates at the end of May, we shared the below chart of the 10-year U.S. Treasury yield. Like other rates across the curve, the 10-year yield had been consolidating above the big downtrend resistance (red line) that had kept a lid on interest rates for the past 40 years.

We emphasised that this pattern suggested rates were likely to make a sharp move in the weeks ahead. And the direction of this move would give us important clues as to which of those two scenarios were playing out.

Well, as you can see in the second updated version of the same chart below, rates have indeed made a sharp move over the past couple weeks.

The 10-year yield has clearly broken out of this consolidation to the upside.  It’s trading above 3.30% as we write.

In addition, as you can see in this next, longer-term chart, this move has pushed the 10-year yield above its previous tightening cycle high of 3.25% from September 2018. 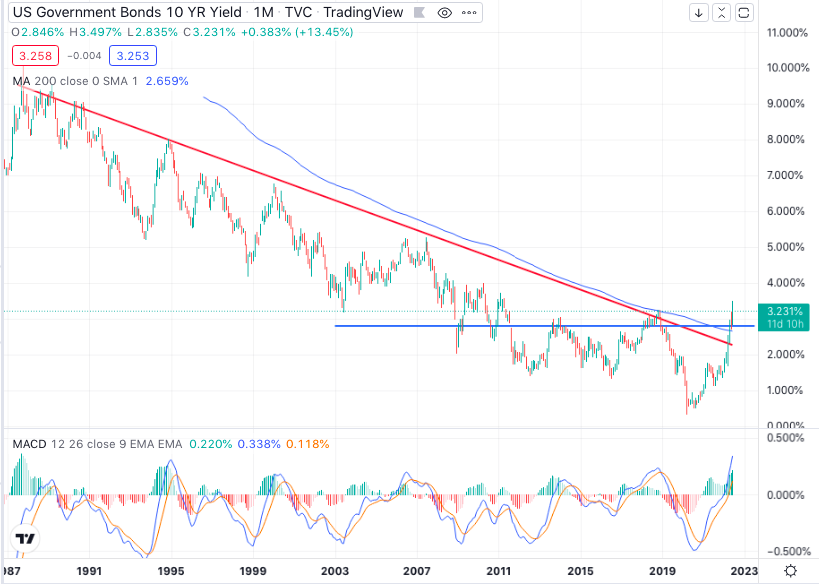 The 10-year yield hasn’t broken above a prior-cycle high since the 40-year downtrend in interest rates began. And again, we’re seeing a similar long-term breakout in yields across the curve, from two-year Treasury notes to 30-year Treasury bonds.

This is potentially a very big deal.

It suggests the breakout in interest rates could be the start of a much bigger, longer-term trend.

More important, it also suggests that the Fed is unlikely to stop tightening anytime soon. (Especially with the White House recently calling inflation it’s No. 1 priority ahead of this fall’s midterm elections.) And that means it’s still too early to look for an end to the ongoing bear market.

In fact, if rates continue to rise at their recent pace, I believe the risk of a crash or serious market crisis will rise dramatically. And if that happens, virtually all assets — including even the healthiest and best-performing assets like energy and commodities — could experience significant short-term selling pressure.

To be clear, this won’t change the long-term bullish thesis. As we mentioned earlier, the inevitable Fed response to any crisis is likely to push inflation even higher, which in turn should cause inflation-friendly assets like energy, gold, and commodities to dramatically outperform.

But that doesn’t mean we can be careless with our capital right now.

The reality is, we can’t be certain how bad things could get before the Fed resumes easing. And given its relatively poor track record in the past, it’s possible the Fed could misjudge the risks and respond more slowly than we expect.

So we urge you to continue to be conservative with your investments for now. That means holding primarily healthy stocks in healthy sectors, avoiding most high-risk, speculative assets, and holding plenty of cash. And please, whatever you do, don’t hesitate to sell if your stops are hit.

If we are right about the Fed’s eventual response, we’ll have plenty of opportunities to profit when the time is right, even if we do get stopped out in the meantime.

We’lll be keeping a close eye on this situation for you.