As I am writing there are just some ten hours before the deadline for the US budget agreement and the fall from the cliff, I want to share some thoughts and remarks on how our economic world is governed and  on sometimes how pointless can be the forecasting exercises. (see our blog for more Attrape-niguauds) 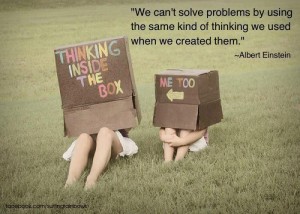 Despite the fact that myself and everyone else acting like they know what lays ahead are proven wrong time and time again, we continue to make predictions about the future. It makes us feel like we have some control, when we don’t. The world is too complex, too big, too corrupt, too lost in theories and delusions, and too dependent upon too many leaders with too few brains to be able to predict what will happen next.

It seems that issuing trillions of new debt to pay off trillions of bad debt, government sanctioned accounting fraud, mainstream media propaganda, government data manipulation and a populace blinded by mass delusion can stave off the inevitable consequences of an unsustainable economic system

“Postponed” is the official stamp across the world. This is the operative word of governmental policy. Whether Europe or America, whether capitalist or socialist government; this is the credo, the banner, the flag waving in the wind for dealing with economic problems. Throw more money at it and barrels of it, have the central banks print and defer any pain much less any tough decisions.

We live in a state of postponement, defer and delay which cancels the consequences of the moment but places more severe consequences, greater pain and tougher choices but moments out into our future.

Make no mistake; the world has become a more dangerous place either haunted by the specter of rampant inflation or haunted by valuations of debt and currencies that could turn the financial markets into a swirl of dislocation where a plunge into a freezing sea of disarray awaits as capital goes to gold, senior debt regardless of yields and nations deemed to be safe havens. 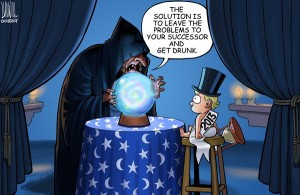 Our first Rule, “Preservation of Capital”

may exceed its present definition as it becomes all that is important and not just one of the considerations for making investments. Look about you, consider with care, what has been fixed and the honest answer, the truthful answer is : Nothing. Greece is no better, Spain is no better, Portugal is no better and America is worse. Nothing has been fixed! Nothing!

Decisions have been postponed and the world is a mess and the first round of liquidity has just about run its course to support the marketplaces and reality, like our precarious fiscal condition, has been postponed but it has only deferred the inevitable and nothing more.  One and one still makes two and the delay at the equals sign will only increase the severity of having to confront the answer.  The beast is there and while recognition has been postponed do not make the absurd mistake of thinking that he has gone away. He has only grown larger in forbearance and he waits, breathlessly, to pounce.

Will 2013 be the year it all collapses in a flaming heap of rubble? I don’t know. Maybe you should ask an “expert”.

I’d like to take this opportunity to thank our faithful readers for following, reading and sharing our thoughts on the economy, the markets and various points of view. We appreciate your confidence and trust and look forward to a prosperous new year.